Back in 2012, the engineers and researchers at Lockheed Martin realized the potential of desktop 3D printing when they purchased their first MakerBot Replicator 2 - MakerBot’s flagship desktop 3D printer at the time. Lockheed Martin’s ATC was working closely with NASA to develop the next generation of space-borne telescope. The James Webb Space Telescope - as it would be called - would allow researchers to see further than ever before thanks to its massive mirror (15x larger than that of Hubble’s) and its ability to see very low wavelength light on the near-infrared spectrum.

With a collection of MakerBot Replicator 2 and 2X 3D printers, they were able to quickly concept and validate early-stage components. “We printed over 250 objects within the first quarter,” said John Camp, a mechanical engineer at ATC at the time. The accessibility of these desktop 3D printers made its mark in a big way by allowing the team to avoid the traditional limitations of ordering expensive one-off parts - now they had the ability to model an idea and very cheaply print it out on the spot.

In 2017, we linked back up with a new group of engineers at Lockheed Martin ATC. This time they were developing an entirely new space-bound photo sensor nicknamed SPIDER (Segmented Planar Imaging Detector for Electro-optical Reconnaissance) backed by DARPA. By 2017, the team had a fleet of MakerBot 3D printers including their tried and true Replicator 2s, and the recently released Replicator+ and Z18 which were the first in the connected MakerBot ecosystem. The benefit of SPIDER was to reduce the size of the imaging payload of a satellite, allowing for additional payloads to be incorporated into the satellite - pushing imaging technology to be smaller, more powerful, and more versatile.

By then, the team was using their MakerBot 3D printers for both prototyping and lab tools. “They’re basically running non-stop, all day long, and have enabled a lot of really quick iterations for parts that may have otherwise slowed completion of the final product,” said Guy Chriqui - a senior research engineer at ATC. Desktop 3D printing at Lockheed Martin had clearly taken a big step from a simple accessible printer, to a web connected platform.

Just last year, in 2021, we checked back with the team at Lockheed Martin’s ATC. While many of the faces had changed again, the innovation and the use of 3D printing continued to progress. This time, they were working on the next lunar rover in partnership with GM as a part of NASA’s Artemis Program. The team at ATC was working on the AI systems that would make the rover capable of fully autonomous navigation on the lunar surface.

Yet again, the team had upgraded to the latest 3D printing technology with the MakerBot METHOD X - an industrial 3D printer in a desktop package. METHOD X allows team members like Senior Mechanical Engineer Aaron Christian to print lots of parts quickly in production-grade polymers, such as ABS which allows for better testing in harsh lunar-simulated environments, like the desert, since the parts can better withstand a wider range of temperatures and UV. Along with accessible, web-connected 3D printing, Lockheed has added industrial power and capabilities with the METHOD X. While the James Webb Space Telescope shows us what the future in technology can bring, in reality, it was built to look deep into the past. In today’s world of new technologies and start-ups, it's easy to jump from one thing to the next without reflecting on what’s been done. At MakerBot, we salute the bright minds at Lockheed Martin, NASA, and all others who strive to push the limits of human understanding by designing and engineering technology at a scale seemingly only exceeded by that of the universe. 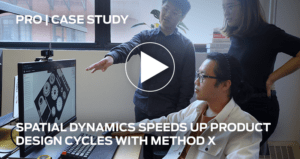