In 2021 there are a variety of 3D printing software options from CAD to slicer and beyond but which have evolved into modern and convenient cloud-based platforms? 3D printing software is one of the crucial elements of the entire 3D printing process that often gets overlooked in the buying process. Understanding which software options are available and how they interact will help you make the most of your 3D printer. First a bit of background. If you’re new to 3D printing, the basic workflow is as follows: (1) Design your print in CAD or 3D modeling software, (2) prep your file for printing using a slicer, (3) start your print either from your computer using a program OR by exporting it to a USB flash drive and loading it directly onto your 3D printer.

In this article, we’re going to cover three groups of softwares that contribute to 3D printing: The main two being CAD or 3D modeling software and slicers / printer management. The third group of other softwares includes a variety of tools that can enhance your capabilities.

Just as in every other industry, there was a time when 3D printing software was relegated to your computer. CAD modeling software from companies like Solidworks, Autodesk, Rhino, and Catia has traditionally been costly - think $10,000 per license, and cumbersome - requiring a highly capable computer. While some of these companies have adjusted to a more modern SaaS approach, others are slower to adapt.

On the slicer side of 3D printing software, programs have also remained strictly on computers. MakerBot Print (formerly MakerBot MakerWare) traces its roots back to the early days of the desktop 3D printing revolution. Over the years, many features such as native CAD import, print preview, and remote printing and monitoring made their way into MakerBot Print, but the program still lived only as a desktop application on the computer. Several popular software products, such as CURA, Preform, and Simplify3D still remain primarily as desktop applications, which require users to manually download updates and may be limited by computer capabilities.

3D PRINTING SOFTWARE IN THE CLOUD

While it may upset some to know, the year 2000 was over 20 years ago. In 2021, most new software companies are focused on cloud-based software as a service products. Why is this? SaaS products allow users to stay up-to-date with the latest features, without requiring manual downloads. Much of the capabilities are moved to cloud servers, only requiring a fast internet connection. It is also easier to implement new features and integrations.

While the 3D printing software industry is slowly making its way into the cloud, here are some of the early innovators in each category.

Besides the enterprise software solutions offered by some, many new CAD 3D printing software platforms have emerged to fill the gap of an affordable CAD solution. We will see some of the popular CAD design software in this category. Tinkercad is one of the first of the new-age 3D printing software for designing simple models. Its target user is the student community who wants to learn and get started with 3D printing. It boasts of a simple browser-based UI that eliminates the need for downloading the software on a computer. This makes it super simple for teachers to get their students up and running, especially with the prevalence of computers in some schools. TinkerCAD uses shapes or primitives that users can combine, or subtract from each other, to make more complex projects.

Tinkercad was early to the scene of cloud-based 3D design programs and thanks to its cost (free), accessibility, and ease of use, it’s likely that the majority of kids who learn 3D modeling early in school today get their start using Tinkercad. OnShape also started as a free CAD designing software but has quickly expanded into a multi-role 3D printing software platform that enables CAD designing, PDM, PLM, collaboration, analytics, and reporting. OnShape makes use of cloud computing to run the software on a web browser, thus automating its regular upgrading/maintenance.

This 3D printing software focuses on product designing and is used by designers from many industries like 3D printing, industrial equipment manufacturing, medical devices, mechanical machinery, and consumer electronics. It is feature-rich and built upon similar frameworks of more traditional softwares, but with the added benefits of cloud computing and real-time collaboration features. This 3D printing software also operates through the cloud and does not need downloading. It offers a free license of three years to a specific class of users and others have to buy its yearly subscription. 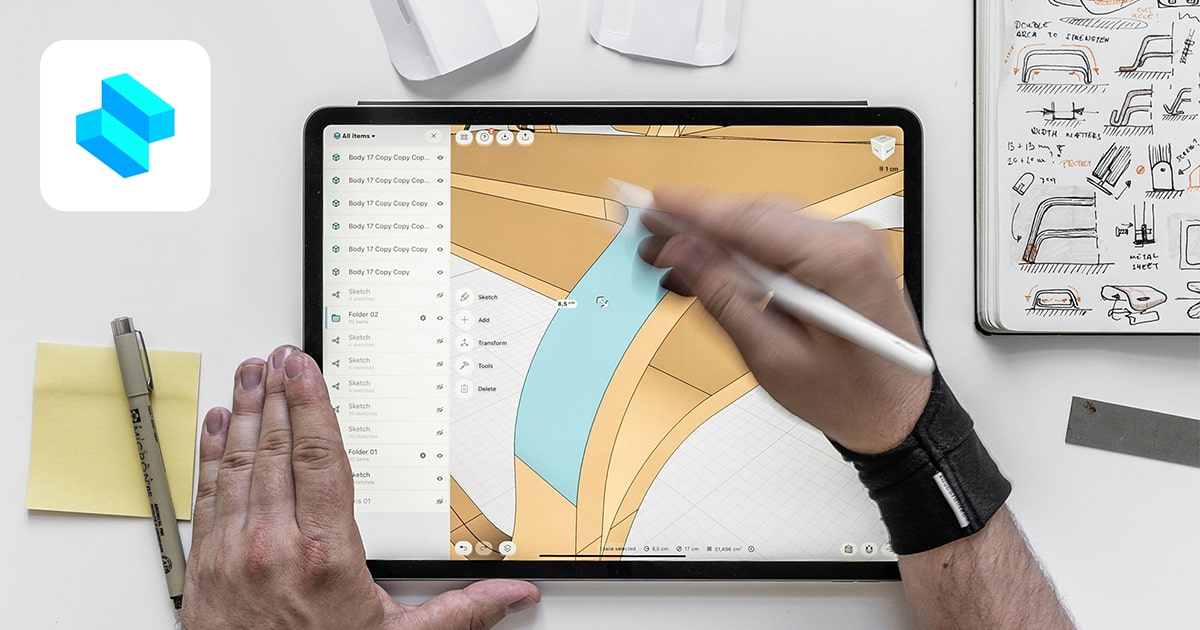 Shapr3D was one of the first native apps for iOS that provided advanced CAD features making it a viable 3D printing software. Coming to prevalence with the launch of the iPad Pro and Apple Pencil, Shapr3D caters to a new age of users who want the flexibility of a tablet to 3D model on the fly - especially designers or those getting into CAD for the very first time.

With the addition of a desktop version appearing in 2020, Shapr3D is quietly becoming one of the more unique CAD / 3D printing software offerings today.

While a number of companies have some sort of remote monitoring, there are actually surprisingly few that provide cloud-based slicing. The tight integration of preparation, with the ability to slice AND print, in addition to monitoring and reporting all within a single cloud-based environment is what sets these platforms apart as truly end-to-end cloud 3D printing software products. MakerBot CloudPrint™ is a 3D printing software by MakerBot that allows teams to collaborate and share access to MakerBot 3D printers even when working remotely.

MakerBot CloudPrint is developed specifically for global teams to collaborate in a faster, easier and efficient way. The seamless collaboration eliminates a lot of wasted time and effort that goes along with desktop-based software. CloudPrint has the superior capability to prepare, queue, print, and monitor prints from a cloud-based platform. With the camera control, live feed and updates are reported on the go. 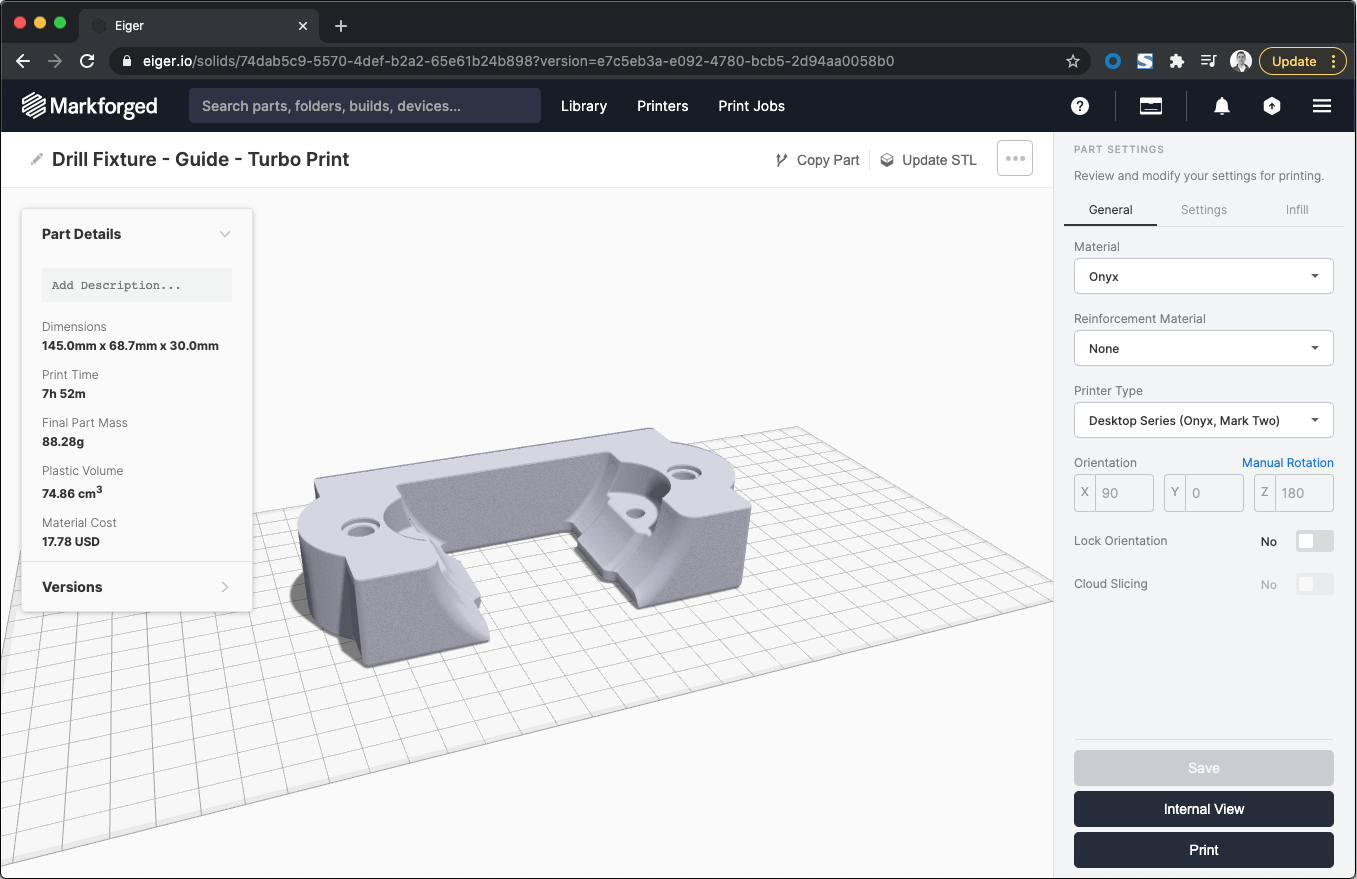 Eiger is the native-slicing software for Markforged 3D printers. It encapsulates some of the benefits of cloud-based 3D printing software with all of the standard slicing features plus the ability to store your files in the cloud for future use, which could be beneficial in use cases where a business wants to keep a digital inventory rather than a physical one. Users can prep their files for print and start prints from any Markforged printer they own. 3DPrinterOS was one of the first third-party 3D printing software options for connecting multiple printers regardless of manufacturer. It is an end-to-end platform for managing files, machines, and users. It is a solution developed for all kinds of customers like individuals, enterprises, schools, and service bureaus.

The cloud-based 3D printing management platform prepares, repairs, stores files and streams 3D designs to 3D printers with complete data tracking and analytics including an audit trail of activity across the entire network.

3D printing software has come a long way since the days of the floppy disc. Today some of the most advanced 3D printing softwares from CAD to slicers are cloud-based and provide the benefits of utilizing server power for background activities, live collaboration, remote printing and monitoring, and more.

Want to find out more about using cloud or machine-based CAD softwares with MakerBot CloudPrint? Talk to a MakerBot 3D printing expert today!